Tanzania, (officially the United Republic of Tanzania) is a country in East Africa bordered by Kenya and Uganda on the north, Rwanda, Burundi and the Democratic Republic of the Congo on the west and Zambia, Malawi and Mozambique on the south. To the east it borders the Indian Ocean.

Tanzania is mountainous in the northeast, where Mount Kilimanjaro, Africa's highest peak, is situated. To the north and west are the Great Lakes - respectively Lake Victoria (Africa's largest lake) and Lake Tanganyika (the continent's deepest lake, known for its unique species of fish) and to the southwest lies Lake Malawi whose elongated depression forms most of the country's border with Malawi. Central Tanzania comprises a large plateau, with plains and arable land. The eastern shore is hot and humid, with the island of Zanzibar lying just offshore.

Tanzania contains many large and ecologically significant wildlife parks, including the famous Ngorongoro Crater, Serengeti National Park in the north, and Selous Game Reserve and Mikumi National Park in the south. Gombe National Park in the west is known as the site of Dr. Jane Goodall's studies of chimpanzee behaviour.
Tanzania's recorded history begins around 1800, when the Maasai warrior tribes were migrating from Kenya to Tanzania.  While the country's coastal areas had long witnessed maritime squabbles between the Portuguese and Arabic traders, it wasn't until the middle of the 18th century that Arabic traders and slaves dared venture into Maasai territory which was the country's unexplored interior.  European explorers began arriving in the mid 19th century, the most famous being Stanley and Livingstone.  The well known phrase "Dr Livingstone, I presume" arose from their famous meeting at Ujiji on Lake Tanganyika. 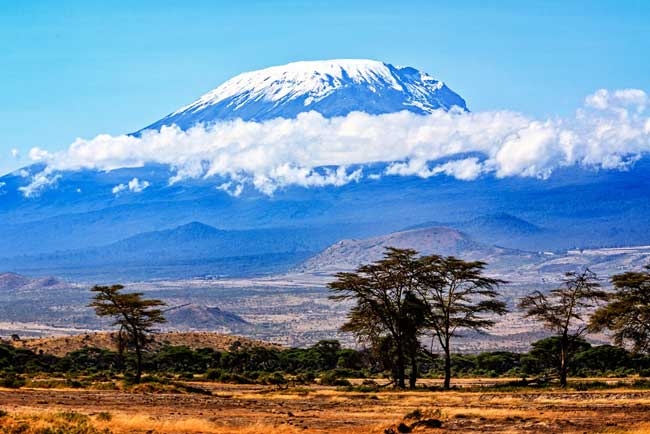 Tanzania is a state composed of 26 regions (mikoa), including those of the semi-autonomous region of Zanzibar. The head of state is President Jakaya Mrisho Kikwete, elected in 2005. In 1996 government offices were transferred from Dar es Salaam to Dodoma, making Dodoma the country's political capital. Dar es Salaam however, remains the principal commercial city.

The current population of Tanzania is estimated at 43,601,000 and the median age is 18.5 years.  Approximately 1,400,000 people are estimated to be living with AIDS which puts tremendous pressure on the health system that is not yet fully developed.

The two main religions are Christianity and Islam with various indigenous beliefs throughout the rural and tribal cultures.  At present it is claimed there is no religious bias in the country’s political and civil administration.

Swahili and English are the two official languages of Tanzania, with English being the principal language of commerce.  There are also many local African tongues, reflecting the tribal diversity of the country. Outside the cities and towns, far fewer local people speak English than in comparable areas in Kenya.

The economy is mostly based on agriculture, which accounts for more than 25% of GDP, provides 75% (approximately) of exports and employs 75% (approximately) of the workforce. Topography and climatic conditions, however, limit cultivated crops to only 4% of the land area. The nation has many natural resources including tin, phosphates, iron ore, coal, diamonds, gemstones, gold, natural gas and nickel. Lack of overall development however has hampered the extraction of these various resources and even up to the present time, there have been plans activated to develop the natural resource sector but no major quantifiable results.

Unfortunately even though it has been blessed with natural resources and a young, community based population – Tanzania is still among the 20 poorest nations in the world today.  The reasons for this are varied and include: a lack of investment in infrastructure, political corruption, the AIDS epidemic which has ravaged the working population and created over a million orphans, lack of access to medical care, an education system that is overcrowded and under resourced and as a result of these and other factors, currently 75% of the population are living beneath the poverty line.